Privileged and blessed by a lovely French girl studying hairdressing, I owe my rich experiences and memories to Gwendeline’s enthusiasm and interest in ensuring my every moment passes delightfully, enriched by high spirits and good company.

Our friendship blossomed in the recent months, whether her first interest in me sparked from witnessing my tray-dropping incident or from her pure, kind, golden heart (you can guess where I’m placing my bet). However, regardless why, she’s dedicated herself to my (and the other American, Jenny’s) service, organizing movie nights, shopping afternoons, and most recently a Disneyland Paris weekend with friends.

Her and I are deep believers in Disney’s magic and wearing Minnie ears notwithstanding rain. Despite the heinous storm, which unrelentlessly threatened our group’s every moment, the Disney magic kept us strong.

While it’s one experience I’d never otherwise choose, I am nonetheless wholeheartedly delighted she insisted on a two-day Disneyland Paris trip. After she organized a friend group, hotel, driver, pricing and finding discounted ticketing, we squeezed into a tiny vehicle at 5:50 a.m. and arrived when the gates opened.

I imagined crisscrossing the park in time with our fast passes, picnicking under the castle’s shadow and documenting every Kodak moment. I slept the whole drive in preparation… and because all transportation rocks me to sleep.

However, we arrived at the beginning of a two-day downpour. While the hail, wind and torrential rain succeeded in dampening potential Kodak moments and reduced our picnicking to wet restaurant-patio sets, bums and sandwiches, our spirits (but not umbrellas) were stronger the wind. 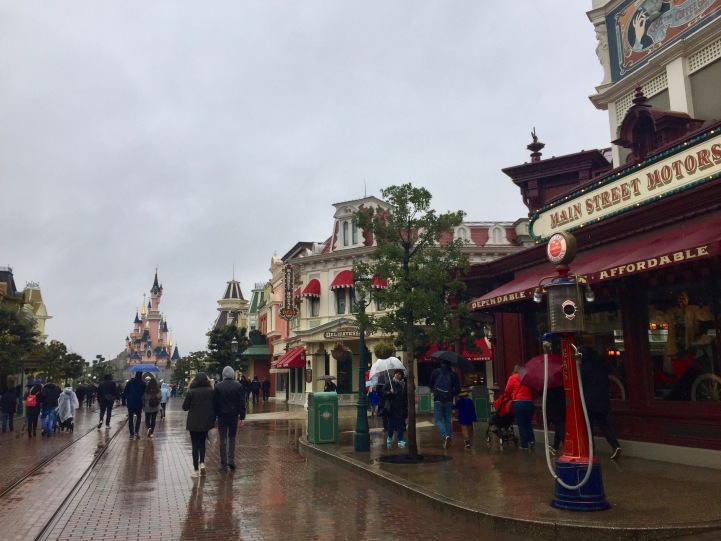 A rainy Main Street welcomed us into the park.

Love this idea: a true labyrinth in Wonderland

The backside of Sleeping Beauty’s castle has a little futuristic flair, in my opinion.

I loved the Aladdin corner. 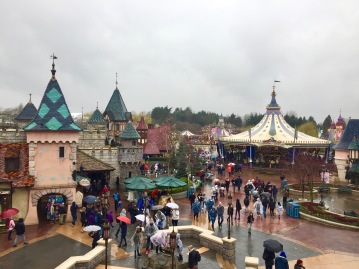 Fantasyland as seen from the castle balcony. 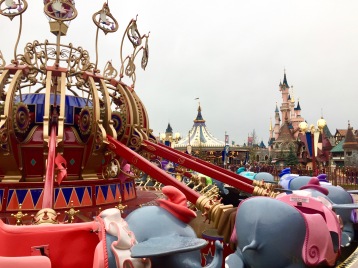 Rode the Dumbo elephants, as in my family tradition.

Disneyland is always about the little details.

The Robinson Treehouse was reinvented years ago in California, but still is a charming attraction in Paris.

A Disney enthusiast myself after growing up about four hours north from the original California park, French Disneyland provided a new allure, mystery and discovery the California park snuffed during my approximately 20th visit.

I don’t remember the last time I rode a ride without any expectations. I had no reference for when mounting the Indiana Jones outdoor roller coaster, or when crossing under Adventureland’s Aladdin building. I didn’t know my way around, and never did since I walked looking at my feet, shielding my face from the rain. 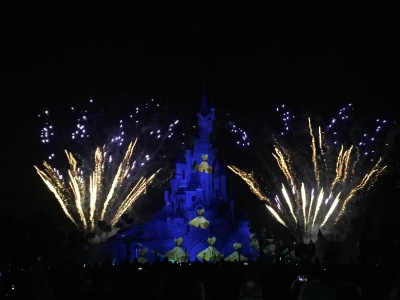 The evening fireworks show capitalized on powerful projectors using images and video to change the face of the castle. 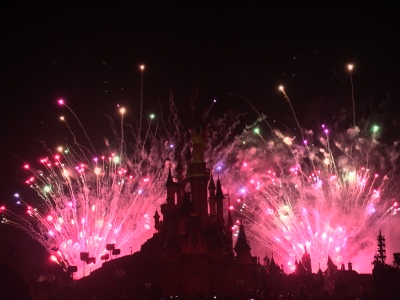 The fireworks display used all fireworks, projections and water fountains in unison, to tell the story with audio.

Thomas (center) and Gwendeline (right) stooped down to take a photo with me at my height. 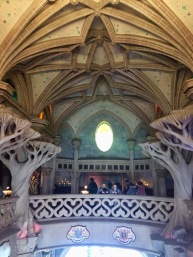 The castle’s interior is like a walk through Arora’s forest.

A Frozen sing-a-long spectacular. I loved singing along with the French translations.

A moment inside for the Frozen Show meant taking a moment to dry off. From left, Thomas, Bastin, me, Jenny and Gwendeline.

We spent Saturday in Disney, riding the Dumbo elephants, Mad Hatter’s Tea Cups, Indiana Jones, Thunder Mountain, Buzz Lightyear Astro Blasters, Haunted Mansion, souvenir shopped Main Street U.S.A., watched the Parade from inside the castle, participated in a Frozen sing-a-long spectacular (in French) and even had the opportunity to watch the fireworks spectacular, as the rain subsided just in time.

The park is adorable, meets every Disney expectation and standard. Like a smaller version of Disneyland Resort in California, but smaller and with its own flair and special attractions, it’s perfection and charm are louder than any thunder rumble.

Sunday brought hail, about an hour of sunshine, and a second park to explore, Walt Disney Studios.

While I took absolutely zero photos inside the park due to the bad combination of rain and electronics, the park was charming, fabulous and mostly geared to older, more adventurous guests.

My excitement level rose considerably when I discovered the Tower of Terror in Paris didn’t meet the same fate as its Californian counterpart. Still up and running, I made a strict point of taking the plunge.

The other attractions tickled my fancy, with a thrilling Rock ‘n’ Roller Coaster Starring Aerosmith (why Aerosmith? I don’t know), the Nemo coster we all hoped for years ago including an exhilarating ride down the E.A.C., a 3-D tour through Ratatouille restaurant from the rat’s prospective, kid’s Toy Story and Cars rides, and Cinémagic.

The parks are just different-enough from California’s parks to evoke a sense of adventure and discovery, but encapsulating the familiarity of Disney and it’s every sparkle of magic.

The weekend generated moments and memories I’ll carry forever. The Disney joy, friend bonding by huddling and hugging in line for warmth, and participating in an old tradition in a new place out lives every miserably frozen memory.