Off-season travel means smaller crowds and lower prices. However, it comes at the risk of bad weather.

Luckily for me, the risk was worth the price and my time in Barcelona was illuminated with the beautiful, bright Mediterranean sunshine. Translation: perfect hiking weather.

Not that big cities have too many hiking opportunities, but when provided with a mountain, I climb them. In Barcelona’s case, the opportunity’s name is Mount Montjuïc.

The mountain’s located in the southern side of the city, just inland from the Mediterranean cargo ports. Accessible by foot, car, bus and cable car, the views at the top make the venture worth it, if nothing else sparks your interest.

I climbed with a friend I met in my hostel after sharing a traditional paella in the gothic quarter. While it was, on my budget, wildly expensive at €24 for a two-person plate, it was an incredibly delicious rice meal, with several seafood varieties such as shrimp and shell fish mixed in and bread to mop up the extra sauce.

Filled with our lunch fuel, we made the climb. I don’t suggest climbing up if you’re not prepared for a little leg work, but it’s not a long climb.

There’s a beautiful garden on the mountain, near where the bus drops off passengers. It’s lovely for a little meander down the paths of stop at the fountain.

I went to the Montjuïc Castle at the top, and would like to go to the Olympic Park next time I’m in Barcelona. While the fortress was small and unexciting, the views and climb were why I went up anyway. 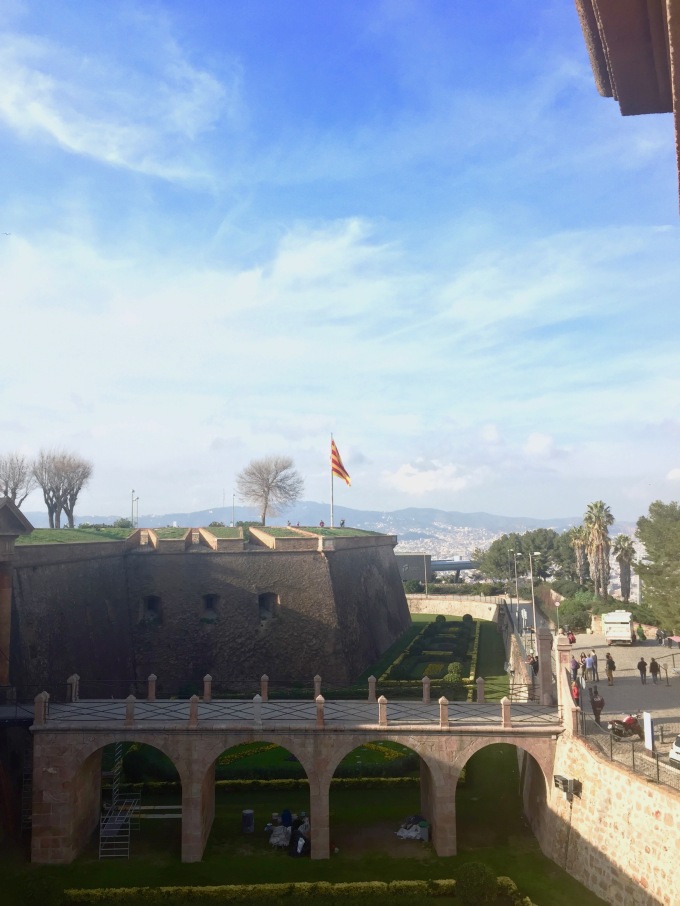 From the fortress wall, we got 360degree panoramas.

The inside of Monjuïc Castle.

The entrance drawbridge into the fortress.

While there were very few furnishings, there were several old canons on display. 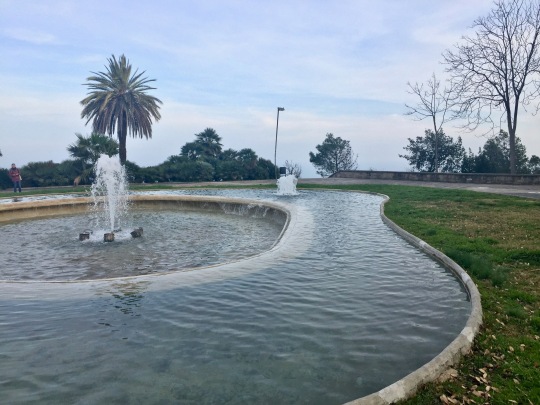 Looking north to the Barcelona coast on the climb up Mount Monjuïc.

Because there was a haze hanging over the city that day, the pictures from the top didn’t capture the spectacular perspective of land and sea. Luckily, I continued to snap photos on the way down.

After we connected with another English-speaker and solo-traveller at the castle, the three of us stopped at a cafe for some coffee and fries on the route back down, then spent the rest of the evening wandering the gothic quarter.

A second water feature on the mountain. 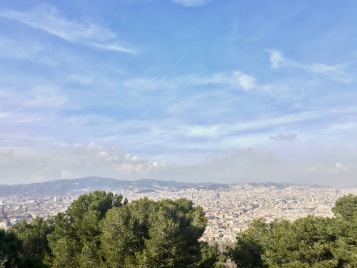 The city sprawl is a beautiful urban landscape. We could see major Barcelona attractions, such as Sagrada Familia, from the top.